In the month of July, 2017, rural people dwelling in Dibru-Saikhowa National Park from indigenous Mising community were left without a choice amidst opposition of resettlement in Torani reserved forest in Tinsukia district of upper Assam by organizations of indigenous Moran group as well as colonial-era migrant groups such as Adivasis and Gorkhas/ Nepalis. There was ethnic tension between the park dwellers looking for settlement and local people resulting in stand-off for nearly a week.
Source: Pratidin Time Youtube Handle
The ill-conceivedly declared Dibru Saikhowa National Park straddles between Tinsukia and Dibrugarh district. The human dwellers of celebrated protected area who were apparently affected by flood came looking for higher ground for shelter as well as settlement. The media figured​ it as about 700 men and women. The stand-off was a sort of humanitarian crisis as the Misings were left like 'people of nowhere'. Thus, the tension in ethnic groups from a bigger angle reflects the fight for scarce and most valued resource: land. Even if it is a reserved forest, that is under the government, the people won't allow to settle even an indigenous community whose land has been sacrificed for a greater purpose such as protected areas-national park as the local people wants to preserve it as forest area itself.
The events led to moderate level media coverages in Assamese dailies such as Asomiya Pratidin( with a front page article in the following day of incident by a Mising journalist based in Jonai), Dainik Janambhumi and English daily, The Telegraph. Even Pratidin Time, a local television channel, showed video footages of the stand-off. But it was surprising that none from the civil society groups including the top-notch public intellectuals in Assam utter a voice regarding the helplessness of the tribal people. Is not it a selective silence on such a humanitarian issue?
Since the places has been declared as protected area(national park) under India's laws in 1999, the people of the villages such as Laika and Dodhia are living with a fearful life of dispossession, helplessness and uncertainty. Talks of relocation were in paper and in the words of bureaucrats and politicians but has never been fully implemented. People have no right to build concrete houses. They have no access to state benefits such as housing, health care, education, drinking water and electricity. Is not this a reckless conservation system? Where are those conservation groups at the time of crisis? It is despicable that environmental and wildlife conservation groups did not mince a word at time of stand off at Tarani. Conservation groups may be in need of human rights education as well in addition to what they eulogized.
According to local account, the population in the park is 12,000. They have been in the villages since ages. Some were resettled by the government after the great earthquake of 1950 and some villagers were already settled there even before that. Government who became a source of blessings in1950s has turned out to be curse in 21st century. Putting animal protection first rather than human beings!Human-beings are becoming victims of conservation politics. 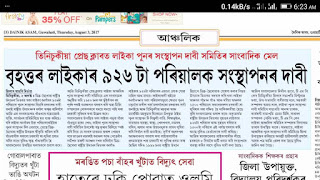 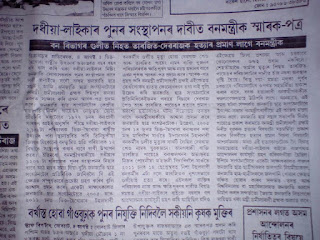 In the first half of August, 90+ Mising women were put into jail in the same Tinsukia district  Some included lactating mothers with child. The women were​ accused of encroachment of Namphai reserved forest. Women are bearing the brunt of fight for living space now. The people who are accused of encroachment are from flood affected riverine areas often prone to erosion and sandcasts leading to landlessness. This has pushed people to fight for survival at the risk of their lives and inviting legal troubles in newer territories.
When people are struggling for basic needs: food and shelter within Assam, this must be enough to raise the conscience of thinking people. Still these  incidents are not enough to generate the will of civil society groups and intellectuals to raise their voice for the helpless tribals. May be because of less political stake and influence in the power dynamics in Assam!

There are talks of rehabilitation of refugees and migrants including grant of citizenship to various religious groups from neighbouring countries of India for quite sometime​ now. One may wonder whether such struggling indigenous tribe within India be declared as refugees in order to get the same priorities and attention of the policymakers and ruling establiments.

Some may claims my observations are not true, therefore, sources of the above facts are provided below:
1.Flood-hit people encroach Tarani
- Tension in reserve forest area in Tinsukia, July 20, The Telegraph