It is reported that constitutional status would be granted to Misings and other tribal councils of Assam by the government.The information is confusing because the specific report is not saying about Sixth Schedule. It is said that the chief executive member of the councils would be an ex-officio member of sub-divisional land advisory committee.
There are reports or cabinet decisions for various packages ranging from education, autonomous councils , financial packages, wage increment in tear gardena to state holiday targeted at the six communities demanding schedule tribe status in Assam.
Therefore, regarding so called constitutional status reports in media  other than Sixth Schedule is short of the demand by the Mising national organizations. 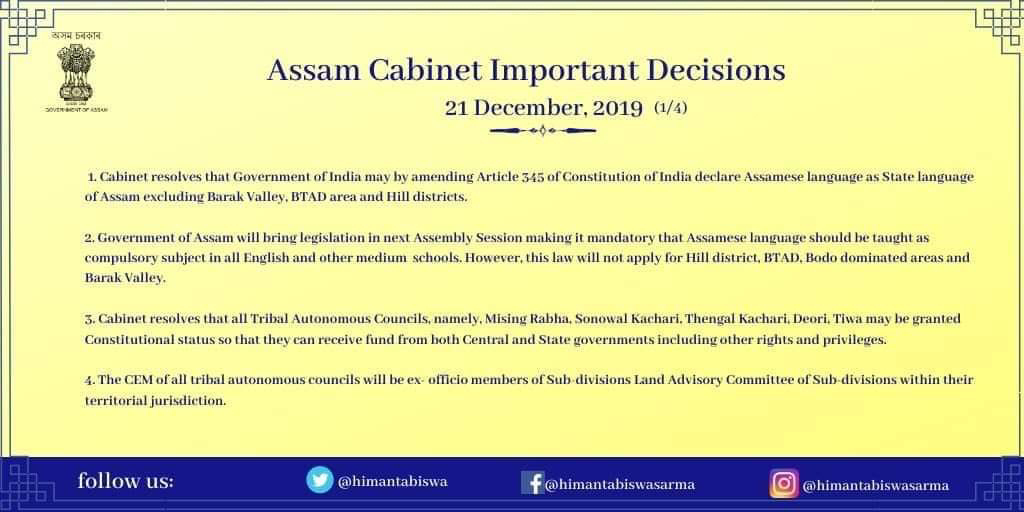 What could be the constitutional status then?
Else, the Constitution of India have to add certain parts that will mention about these tribal councils.
What is it specifically?
Like Article 371 (A), where there is a protected clause for Nagaland's own control over resources , customary law and practices, there can be a constitutional clauses specifying the tribal councils' land , customs , traditions, social identity etc.
However, there is no clarity on the entire issues. The BJP led state government in Assam seems engaging in political manuevering to deal with the public dissent. These reports are emerging in Assam amidst rising protests against citizenship reforms in the state as well as across the country.
More about Article 371(A):of the Indian Constitution:
https://indiankanoon.org/doc/371998/
at December 21, 2019 No comments:

The Misings in Upper Assam continue to lose most of their arable territory to constant floods, forcing the affected people to look for alternate living spaces. Often, they find themselves occupying land in protected forest areas, leading to conflict and opposition; both from conservation groups and the local population of the region.
Read more : https://www.epw.in/author/bhasker-pegu-and-manoranjan-pegu