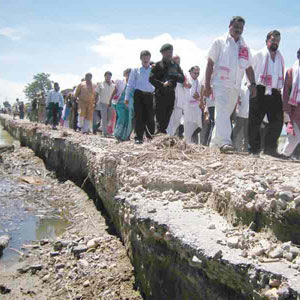 The floodwaters affected vast areas of Dhemaji sub-division and some parts of Jonai sub-division. However, there is no report of outbreak of any communicable disease from any part of the district so far, said the Deputy Commissioner.By this time, floodwaters have started receding gradually in Majuli river island and normalcy is expected to return to the island within the next seven to ten days, said SDO (Civil) of Majuli P Handique.The civil administration of the island held a meeting with the traders’ organisations of the island today with view to maintaining the price line and also the quality of the essential items.
The traders are asked to display the price lists of the essential commodities for the knowledge of the customers, said the SDO.A meeting of the Gaon Burhas is also convened tomorrow by the civil administration to make them aware of the need to maintain a live communication with the civil administration on issues like food poisoning, outbreak of communicable diseases etc. It needs mention here that some islanders fell ill recently after taking maah prasad at a religious function.
Courtesy:The Assam Tribune,27-08-09
at August 31, 2009

It is argued in social media these days that MIsing language has not seen development as that of Bodo language. Although it was postee by so...